The Evening Muse on March 16th 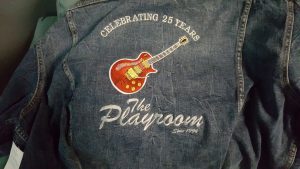 Here we are at a point where I know the world is about to change. In retrospect, as I write this much later than the date listed, I see how far the world has changed, as well as how much I miss live music. This is the last live performance in a crowd that I would see all year.

Let me start with Abby K. I first met Abby at Eddie’s recording studio, The Playroom, in mid-2019. Eddie introduced me to her as someone they were working on, and that she’s a bass player. I asked who she could be compared to, and Eddie simply said, “Lemmy”. At that point my curiosity level increased. You don’t usually see a young, tiny, blonde girl wanting to play the bass guitar, let alone play like Lemmy! And yet, here she was, standing in front of me. Before the end of the year I got to hear her first single, “Should Have Been Me”, and I was quite impressed.

The song, “Should Have Been Me” is a clear and direct statement that could be taken to be directed at any number of people. A would-be suitor that turned her down is the first thing that comes to mind, after all, what else would such a young girl write a song about? And that’s where everyone that assumes that is wrong. Abby wrote a song about, and directed at, another band, and that it should have been her in there after they chose someone else after the audition process, even though they said she was the best one to have auditioned for them. Speculation may abound as to who that band was, though really, it’s not important, the song stands and as such it truly proves its point.

When I heard that Abby was to perform at the Evening Muse, opening for Eddie Z’s band, I was eager to hear how the recording would translate to a live performance. A lot of times a band records something and then struggles to recreate it live. This is not the case with Abby K. It became obvious that she is a live performer that happened to get recorded. I walked into the Evening Muse and she and her band were performing “The Trooper” by Iron Maiden, and truly doing it justice. I’ve heard female musicians cover that song, most notably by the band The Iron Maidens, and Abby’s performance exceeded theirs in power and passion. This is interesting because the guitarists for the Iron Maidens, Nita Strauss, had spent some time with Abby, had her up on stage performing when she toured and hit the Charlotte Fillmore, and was, as I was told, very impressed with Abby, her playing, and her passion and drive. As anyone that has met Abby should be also!

I really do not want this review to be about her age, the fact that she’s a girl, or any other point along those lines. The only thing about her performance that I found that I struggled with was one statement she made in her stage banter to the audience, and that’s when she said, “Yeah, I’m a girl. Yeah, I’m only 17. And yeah, I’m going to rip your face off.” And then she tears into “The Ace Of Spades”, what is truly Lemmy, and his band Motorhead’s signature song. Though I do find that banter to be cute, it points out things that are obvious and truly not needed. None of what I’m pointing out here should be taken as a detraction to the show or Abby herself. I personally find that the statement, being obvious, should be implied rather than outright said, and that’s all. I mean, if you don’t get it, you won’t, so why point it out? I look forward to when she does not have to pander to her audience in that manner. I also look forward to when her audience is much larger, and it will, it’ll just take a bit more time thanks to nobody being able to perform live throughout 2020, and beyond, maybe?

Abby K’s performance was a hard hitting sonic blast of some of my favorite hard rock and heavy metal songs, plus a few of her originals. The interpretation of these songs, as covers, goes beyond being spot on, they’re not just being recited, they’re being interpreted and presented in a great form by Abby and her band. I can’t wait for more music from Abby K. As this world changes, as it looks like it’s going to do so, I hope she gets more inspiration and writes, and records, more music.

Eddie Z’s band and performance was good. A different style, and after Abby K, a complete shifting of experience. This is not to say that it wasn’t enjoyable, Eddie and band are wonderful and I love their style of music also, it is just different that the face melting metal of Abby K. The musicianship is top notch in the band, and Eddie’s guitar rings out beautifully. I am extremely familiar with that guitar as I examined it closely in my ‘other life’ as an embroidery digitizer. I put that guitar on the back of jackets, a bit of work I am very proud of, to the point that I’m including pictures of the back of two jackets in this review.

I apologize to Eddie and band. This was the last performance I saw prior to COVID-19 pandemic protocols being imposed, and a lot has happened since I saw the show. I do feel that my review regarding their performance does not give enough about them, as I’d written the first part not long after I saw the show, the part about Abby K that is, and kept putting off returning to the article. Now As soon as we are back to being able to have live shows, I hope Eddie and band play again, and I hope that happens soon!