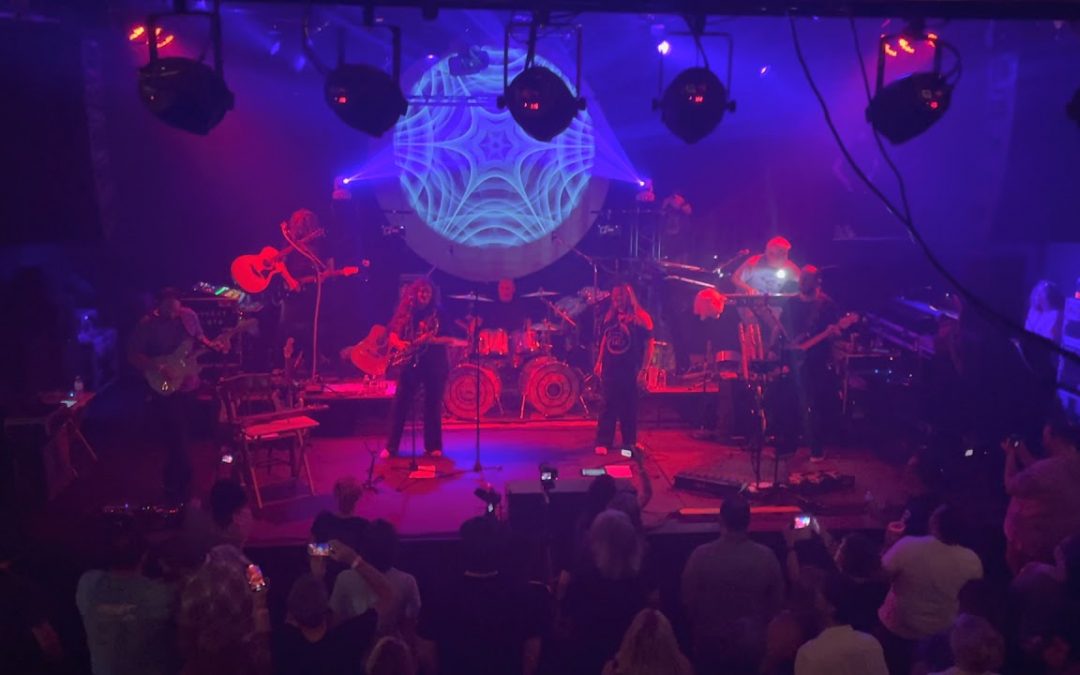 It has been a long almost-year since I’ve seen a live band perform. The last show had been “Abacab: The Music of Genesis” back on July 18th of 2020. Sure, Tessa Harmon of the band, “Buried In Roses” played a couple of pieces on the Tarotunes show back in April (yes, of 2021). She played a Tim Buckley cover, “Song to the Siren”, and also “Never Turn Your Back On Mother Earth”, and that was great. Even still the previous full band performance wasn’t really even for me as an audience at the venue as it had been for the viewers online. It was a benefit show to support the venue, The Visulite Theatre. So, going back before that, we are talking about Abby K, then Eddie Z & The Vault Dwellers, at the Evening Muse, mid-March of 2020. After much anticipation I was very happy to find out that my favorite tribute band ever, Pinkest Floyd, were playing.

Before I dive deep into this review, I have to say that this is one band that’s exceedingly close to my heart. The band they tribute is one that truly changed my life. It was said about me by a friend I’d known for more decades than I can count, “You didn’t have to deal with Stan in the days, weeks, months, and even years, after The Wall came out.” To which I inquired, “was I that bad?” His response was, “you were a bit obsessed.” Of course the vindication came from the others who responded with a “rightfully so” and all was well.

Anyway, more on how Pink Floyd changed my life in a later post, I’m here to talk about the performance of the tribute band, Pinkest Floyd, at Amos’ Southend, on July 5th, 2021. Let’s start at the beginning. I was happy that there were so many in the audience that had not seen them previously. Obviously advertising about the show is working, yet also the fact that it was one of the first opportunities to see a live band after so very long didn’t hurt, as well as the fact that it’s the music of Pink Floyd!

What I love about Pinkest Floyd is their attention to detail. The songs aren’t just performed, they’re truly presented as we know and love them so deeply, yet as performers, they truly take the songs unto their own. To be a tribute to such a progressive and intricate band, such as Pink Floyd, and still to be their own in the presentation of it all, that completely astounds me.

Starting off by playing a piped in recording of Pink Floyd’s “Obscured by Clouds”, the band begins playing the start of the album The Wall, with “In The Flesh?” A great way to start a show! Doing most of side one of The Wall, the show comes to the feature they advertised, the entirety of the Animals album. Yes, they played all of Animals! What gets me is that is one album of the ‘70’s era of Pink Floyd that is most divided by fans. Many really do not like it, or is it that they just don’t ‘get’ it? It is one of my favorites, yet I have to say there is one thing you’ll not see me list in preference order, the Pink Floyd discography. I may do that for many other bands, just not Pink Floyd! They all are at number one to me.

After performing the Animals album, Pinkest Floyd presented a run of songs in an order that may seem random to some, yet to me it makes sense. Going from “Wish You Were Here”, to two songs that need to be performed together “Empty Spaces” & “Young Lust”, they stayed with The Wall album and played “Mother.” This was where they shifted back to the Wish You Were Here album with “Shine On You Crazy Diamond (parts 1-5)”, complete with the beautiful sax soloing and astounding guitar. Their ambition shines through when they went from “High Hopes” to “Careful With That Axe Eugene”, proving that early Syd Barrett era pieces can easily follow songs from when David Gilmour was in charge. These selections just pushes the fan in me to just cheer, or really to stand in awe with a smile on my face. Just great stuff.

Then a run through of a lot of The Dark Side of the Moon album. Sure, they skip over “On The Run”, yet they move quickly into “Time” and “Breathe (reprise)” nicely. Personally, I think that they should do “One of These Days” instead of “On The Run”, just like Roger Waters had done on his “Us & Them” concert tour, album, and Blu-Ray film. As the “Time/Breathe (reprise)” was ending a guy standing next to me, who had never seen Pinkest Floyd before, leaned over to me, meanwhile looking at Brooke, the featured back-up singer, who was stepping forward, microphone in hand, and he said, “can she do it?” My response was an emphatic “Oh Yeah! You’re not ready!” Brooke’s performance of “The Great Gig In The Sky” puts me in tears every time. Not only does she pull it off, she performs the lyric-less vocal piece with a passion that matches that of Clare Torry, the original singer of it. Again, it’s what I love about Pinkest Floyd, they somehow straddle the fence between presenting the songs with their own take on them, yet also being true to the original recording. Brooke’s powerful performance of that piece puts me in tears every single time.

After that dive into The Dark Side of The Moon, that finished with “Money”, they moved back to the Wall with “Hey You”. If they had left the stage at that point the next two would have been considered an encore. They tear into “Comfortably Numb” and the entire audience is singing along. And the guitar solos! Ryan pulls from a place few people even know exists.

The closing piece, “Run Like Hell”, is an interesting choice. What I like about it is it brings me, and maybe all of us in the audience, down from the catharsis of “Comfortably Numb”.

A Pink Floyd tribute band? Sure. Yet they are so much more than that. Yes, if you are going to play Pink Floyd, “Money” and “Comfortably Numb” are two that have to be done and as I’ve said, Pinkest Floyd plays them. It’s that they take them, all of them, all their music, and elevate it to a level that I’m struggling to describe. Then again, they’ve called me their mascot.