Heilung performed at the Fillmore in Silver Spring, Maryland, on January 22nd, 2020. Traveling to the show, spending the previous night in a hotel near the venue, and the day of the show in the area, then spending the night after the show so as to not drive home flying on the high that is a concert – and no, I’m not talking after ingesting any substance or liquid that may alter ones perceptions, I’m purely talking about the ecstasy that is inherent in going to a concert and experiencing music being performed live. Especially a band like Heilung, that hits you on so many levels.

Speaking of levels… Heilung themselves don’t refer to what they do as concerts, or performances. Instead, they are “Rituals”. Which is really what we experienced at the Fillmore Silver Spring, that night. Outside the venue, looking at the poster for the show, I noted that it really presented as a German heavy metal band, with a black background and Maria Franz, the female lead singer, in her makeup and teeth screaming out like she’s attacking someone. Definitely not what I experienced inside during the show. 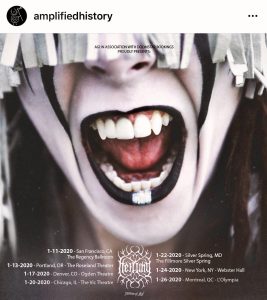 Really, it was a ritual. The large stage had a center runway that came out about twenty feet, and at the rear center there was a huge drum that was suspended on its side, kind of like you’d hang a gong. Two keyboard banks on either side, though one had more percussion type instruments than I could count. The ritual started, as a lot of rituals tend to do, with a cleansing of the space. This included smudging the area, burning of sacred herbs to fill the area with their healing smoke. And the smudger made sure that the smoke got up into the balcony and all around the inside of the Fillmore. Then the rest of Heilung took the stage and chanted in a circle, appearing to honor the directions and the elements they represent, along with bringing in the ancient gods. They call their music amplified history from early medieval northern Europe, and they’re not kidding around about it. When the music started, primarily and primitively percussion based, there were three women that were back up singers. There were two men as keyboard players, which probably also included sequencers and other things, and they also played a variety of percussion instruments. A male lead vocalist, Kae-Uwe Faust, and also a female lead vocalist, Maria Franz, were the focal points of most of the show, yet it went much farther than that, after all it is a ritual, not just a performance. One could argue the point that Heilung in concert is a performance art piece, yet there’s so much else going on, it’s tough to limit it to those terms. Heilung had warriors come out, one of whom was a woman. She ended up being the ritual sacrifice, and subsequent resurrected warrior, turning her into what one could come away with as her becoming the leader of the warriors, though that’s an interpretation that I can’t completely keep as valid. Again, it’s tough to describe.

One thing that usually happens when a band performs, is that they address the audience at some point, talk to them, thank them, say how great it is to be in their city. That last one is the source of humor when they get the wrong city, yet that also happens when you travel as much as touring musicians do. Heilung did none of that. They directed the ritual at the audience, yet no interaction until late in the show when a couple of warriors took a running leap into the audience, stage diving and being carried around on the audience’s arms, fist in the air when they were maneuvered back to the stage.

Whenever I’ve been to a concert, I can usually name the songs performed. This time it really doesn’t matter. Though on their albums I have recognized some of the pieces, I still don’t know the names. Yet that doesn’t matter. It was an experience and one that I hope to have again.